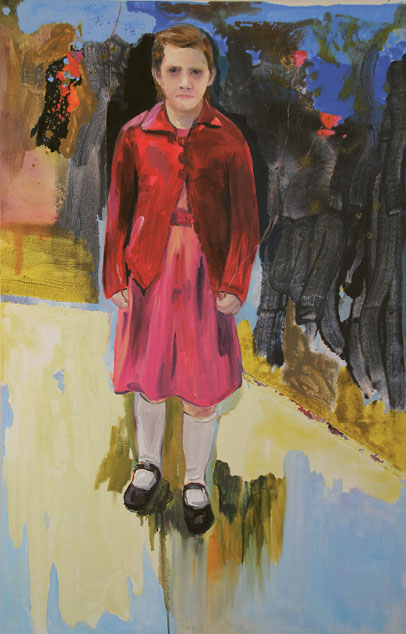 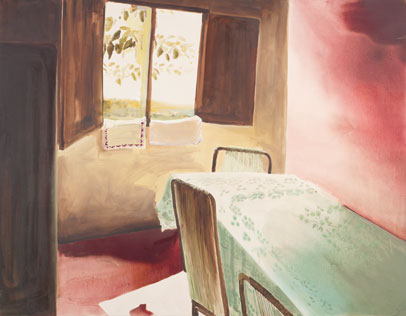 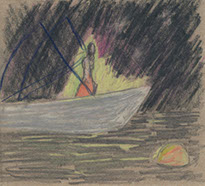 pencil and coloured pencil on paper 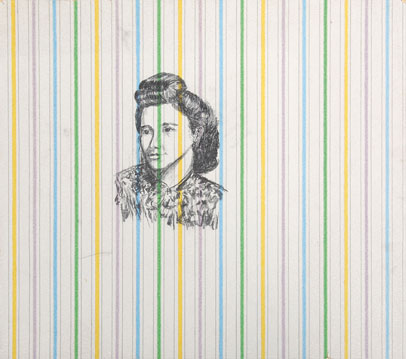 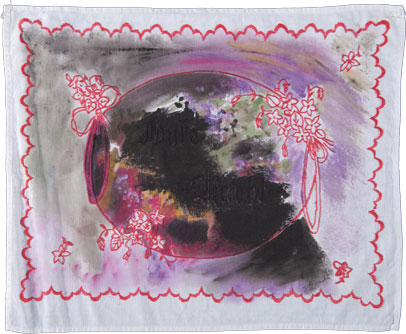 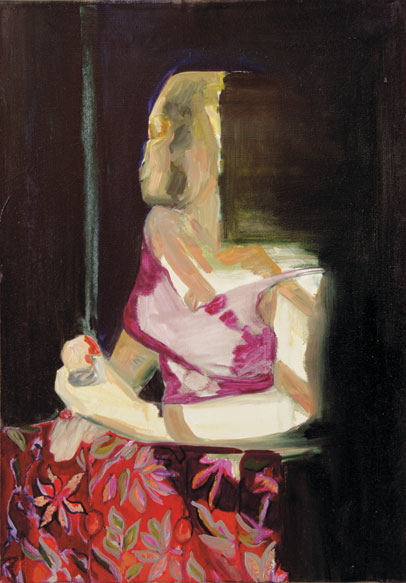 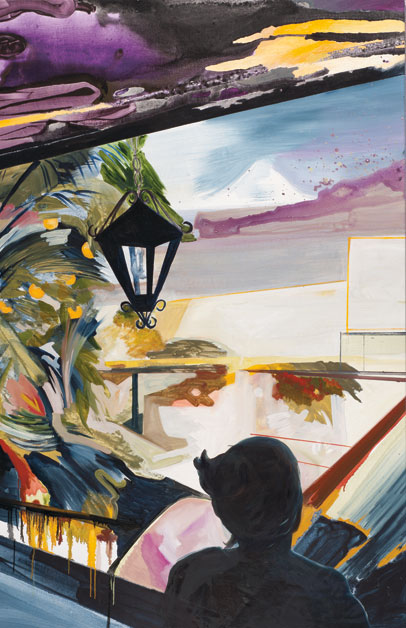 Somewhere in the Distance

On Elisabeth Wedenig's Body of Work.

It must be noted that, contrary to some visions of the second half of the 20th century, contemporary painting has endured. The ultimate end of the genre was proclaimed much too hastily. From today's perspective, Das Ende der Malerei1 (The End of Patinting) has turned out to be nothing more than a voice from the past. Attempts at an institutional revival of painting to compensate for the changes initiated by the emergence of the New Media, which caused painting to slip from its lead position among the traditional artistic genres, only aroused suspicions of the pursuit of commercial interests. Especially since the turn of the new millennium, the American art market has taken an active interest in the socialist realism of the Leipzig School and the subsequent generation, the Neue Deutsche Malerei.2 When Neo Rauch's works are sold before even being painted,3 this is testimony of the utter primacy of strategic market trading within the art field, which puts at question the intentions of the artist as well as certain views of art history. The fact that modern-day neoliberalism doesn't stop at the world of art seems like a logical consequence of society's overall development.

Nonetheless, when looking at contemporary art production it is clearly ascertainable that, contrary to commercial perception, the painting of many young artists is still fueled by a primarily artistic drive. Even though installation works are currently celebrating their triumph in prestigious art institutions, and video, photography, computer, and internet art appear to have found their place in the sun, the past and present continuity of artists who see themselves first and foremost as painters remains undeniable.

Elisabeth Wedenig belongs to a generation of young Austrian painters who have dissolved the classical problems of modernity (abstraction vs. figuration; reproduction vs. originality), into a post-postmodernist4 "both-and-more" position. A majority of painters working today are no longer concerned with the exploration of the perceived limits of painting, preferring instead to simply just paint pictures. Their interest appears to lie with the way an image emerges through the act of painting, and there are as many answers to this as there are different artistic styles and approaches.

A defining characteristic of one direction of young Austrian painting is its focus on the exploration of the relationship between visible reality and fiction, as was shown in the HangART-7 Edition 15 exhibition 2010 in Salzburg. Principally figurative-narrative approaches were seen, which, as described by Lioba Reddeker in her introduction to the exhibition's curatorial catalog, are to be understood more as an "approach to reality" than "a definition or documentation of reality".5 The imagery of the painters collected in the exhibition draws mainly upon internal images, emerging from childhood memories or the pictures spread by the mass media.

Elisabeth Wedenig's world of motifs is influenced by memories, dreams, fantasies, glances, and incongruous bits of reality, and the images are formed to a significant degree by the subconscious.

The Kubahaus (2006) and Soucouyant (2007) series arose during travels that led the painter to Cuba and the island of Tobago. Here, Wedenig made drawings and smaller works in oil from the motifs offered to her by the location. Many of the works, some sketch-like, were made as plein-air paintings, under the open sky and directly in front of the subject. Her eye for ethnographic analysis can be recognized in most of the portrayals. Although cultural peculiarities grabbed the painter's attention and thus selectively found their way into her visual world, the resulting panels are not simply a documentation of what she saw. Instead, Wedenig seems to seize the sense of atmosphere and let it speak through her work. In some of the resulting oil sketches, the motif has been transformed by her visual imagination, reinforcing the cultural mysticism of the imagery. The eerie silence and sometimes melancholic mood that speaks from her paintings are emphasized by the tenderness and care with which she paints and through the matte green and purple tones that dominate the color spectrum of her art.

It appears that the works made while traveling, mainly sketches, released an unfinished habitus, which goes on to find continuation in the subsequent series of images, of using fragmented images as an artistic impulse.

The Somnabul series was created in 2008, Wede­nig's graduate thesis for the Academy of Fine Arts in Vienna. The series shows reminiscences of the artist's grandmother, processing the death of a close relative by tying materials found in the grandmother's house, such as boldly patterned wallpaper, with images from memory, imagination, dreams, and images from old photographs from the family's archive. Wedenig, unconsciously steered by her imagination, links and interweaves artificial image motifs and commercial wall decorations of the past into harmoniously matched representations. The works consistently show narrative moments, vividly recounting her grandmother's life and home environment from the perspective of the granddaughter.

In the series Haus eines Anderen (2008), Wedenig combines remembered images of her world travels with vivid fantasies that arose while reading Kafka. In these works, the individual motifs are arranged into novel scenarios, gripped by a dream-like quality. The title of the series foreshadows the selection of interior scenes, accompanied by an eerie atmosphere, depicted in these drawings and oil paintings. When human figures appear in the works, they are often painted in a translucent and fragmentary manner that strengthens the impression of mystery. The coloration tends towards to be dark and the penchant for purple hues already ascertained in the travel paintings underlines once again the melancholy that speaks from these dream sequence images.

In the Sternengärtner group of works (2008/ 09), unspecified cosmic spaces form the background for ghostly and angelic figures, which are sometimes joined with depictions of forest animals. Wedenig combines a translucent painting technique with meticulously formulated sections, which can often be recognized as ornaments robbed of all spatial aspects. As in the Somnambul works, Wedenig amalgamates her own imagery with found objects from her grandmother's legacy. Old, commercially distributed images of saints are collaged into, altered in various degrees, Wedenig's world of images, processed into imaginary pictorial narratives. One series of small works, made on handkerchiefs, makes a clear reference to the procedures Wedenig used in the Somnambul series. The small, partially patterned "canvases" become the starting point for finding the picture within, which is revealed to be a free association or a memory. The cloth handkerchief is a nostalgic throwback to the past.

The Honigstaub series (2009/10) is a logical progression of Wedenig's artistic approach. As in previous works, the color palate is kept rather dull and gloomy in many pictures. Morsels are once again culled from the grandparent's store of images, commercial depictions of saints woven into the collage of Wedenig's illusionary dream world; ghostly motifs incorporated into narrative-figurative scenes. Individual sections of the canvases are elaborated in fragments, while others exhibit picturesque care and concreteness. The background space is not always clearly tangible, and sometimes appears to be an entanglement of in front, behind, and in between. As in earlier works, animal representations frequently appear in the paintings. In some works, family portrait photographs are altered through painting or drawing, a substantive reinterpretation of a message from an unspecified "grey area".

The works Klaus weiß Bescheid and eine Liveschaltung (2010) have been shown as part of an exhibition in the Villach city center, and gives us a foretaste of what will come out even more clearly in the works of the subsequent series: individual image elements reappearing in different spots. Thus, the forward-facing Klaus Kinski in the canvas painting Klaus weiß Bescheid, which is a part of an overall installation piece, is holding a candlestick on his arm that is also standing in real space only a few inches from the picture on the wall, an artistically transformed object that, along with a toy horse, has found its place in the arrangement.

Borrowing the title for her 2011 group of works, Evening Over Rooftops, from a song by the Edgar Broughton, Wedenig continues the development of her previous series. The coloration, the interchange between translucent and bold brushwork, and the elusiveness of the places and spaces in which beautiful scenery reveals itself, are continued and developed in these new paintings. Three large-format pictures are linked by their portrayal of a kaleidoscope, which is not the main subject in any of the works. The works form a system of reference, which on closer inspection divulge formal, puzzle-like similarities and continuation from one work to the next. As in previous paintings, family photographs and other visual input find their way into Wedenig's visual world, where the painter then weaves individual motifs into new narrative scenes.

In summary, it can be ascertained that Wedenig's dreamlike, illusory and figurative-narrative representations are nourished mostly on memories, dreams, fantasies, and the reality of the objective world. They have an inherent tendency towards the ghostlike and mystical that is intensified by the nonspecification of exact location, ambiguous image spaces, and often dark or dull color palette. Wedenig's interest in producing images that portray a counter-reality results in mysterious "reports from a parallel world".