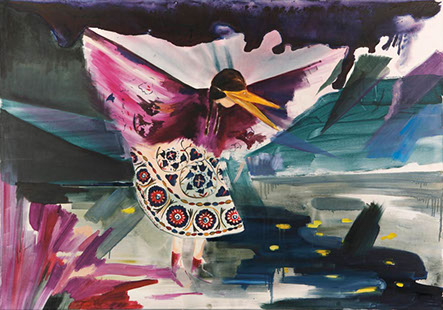 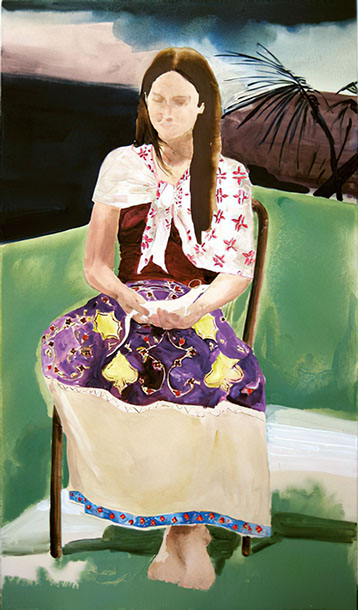 A Dreamy Sense of Reality:

It is possible to classify painting since the early Modern Age into two general groups: line painting and surface painting. Although this is a very simplified and rough categorization, it becomes apparent when comparing, say, Picasso and Matisse, Feininger and Nolde or – in Austria – Schiele und Klimt. Clearly, this is only in regards to the overall characteristic tendencies of the respective works. Lines emphasize the form, while colors highlight the optical phenomenon as such. Once realized, this distinction becomes so evident that it needs no further description. What helps us herein is that with the above-mentioned classics of the Modern Age, we see very clear-cut lifeworks standing before our eyes. This is on the one hand.

On the other, one must concede that this classification into linear and flat structuring must increasingly be regarded as obsolete for post second world war art, as it understandably has no significance for action painting, for the "informal", and for other directions ranging from arte povera, to concept art, to present day media art. However, objective art – the only place this classification has characterizing validity – is not dead. There are, for example, Edward Hopper, Giacometti, and Morandi. There is the "Junge österreichische Malerei" (Young Austrian Painting) of the early 1980s (which considers itself to be a rebellion against the "pressure" towards abstraction), the neo-expressive bluster in Germany (think of Anselm Kiefer, for example), or photorealism. There is the return to realism by "Young British Artists" (since the late 1980s) and the "Leipzig Schools" (since the early 1990s; currently called the "Third" or "New Leipzig School"). This means the trend is rising. One could explain it with the fact that the technical and medial possibilities of innovation and dissolution of boundaries have been so widely exhausted that everything is now similarly and equally available as an artistic means of expression. Specific style preferences are now less influenced by market and fashions and increasingly by individual points of view and convictions. It is for this reason that the classification made at the beginning is gaining significance again. New Realism, Figuration, and New Representationalism have – and this is basically important – nothing to do with New Objectivity. They are not about a style revival! Each of them is a different and concrete answer to the respective overall state of things and not just to art itself! This can be clearly seen in Elisabeth Wedenig's works.

The first thing that strikes the observer is her practiced brushstroke. One notices that she has painted a lot since her childhood, that she is able to paint. This imbues her brushstroke with informality and naturalness; it is not mannered. Actually, it is mostly bundles of strokes which give the depicted not only plasticity but also a distribution of weight; not just light or dark. Although the group of works Kubahaus (Cuba House, 2006) does contain a series made of single line outlines, this is really an exception. The second series, titled Busreise mit dem fliegenden Känguru (Bus Journey with the Flying Kangaroo), dates from the same year and shows the type of brushstroke found in later drawings and paintings (here in detail!). It is not ingeniously expressive, but rather professionally manual, describing using a skill that itself is no longer an issue. In combination with the often "exotic" subjects, the impression of ethnographic travel pictures is made. Whether the subject is a haircut, a house, or a fruit (fauna and flora in general) - Elisabeth Wedenig consciously records excerpts of it. A documentary of sorts. Her view is inquisitive, but not obtrusive. The questioning stands for openness and open-mindedness; the discrete observation for emphatic respect, nevertheless not with a lack of distance. No false identifications.

As just said, reality is depicted in fragments, extracted; and at the same time formally. Essential parts of the background are left open. One could assume that these were studies, but for that they are much too complete. Nothing is missing. Romanticism already loved fragments and the fragmentary; although it was for ideational, ideologically philosophical reasons. Or, in very different words: traditional East Asian art, part of the mastery of which is to make empty spaces appear to be space, the cosmos in which the depicted has its place. Elisabeth Wedenig's fragments have nothing to do with either category. Here, it is about something completely different. It is about the – already mentioned – documentation, the quasi-ethnographic detail. One could describe it as diagnostic detail, thinking of the sensational late-1970s essay Spurensuche (Searching for Clues) by Carlo Ginzburg. In this essay, Ginzburg describes in particular the diagnostic view that, originating from Giovanni Morelli's groundbreaking essays on modern museum science, very quickly drew attention to unnoticed details – particularly in criminology, medicine and psychoanalysis. In a certain way, the inconspicuous thereby becomes the true source of information, because the apparently negligible promises the key to finding the authentic, the real.

The interesting aspect now is the following: Elisabeth Wedenig has never read this essay and was not aware of the significance of this theorem on diagnostic search for traces. Thus, she couldn't know that this theorem also applies to her work in its second function. The second focus of Elisabeth Wedenig's work (in addition to the "ethnographic" detail) is dreams. To be more exact, she works with her dreams. This means that to a certain extent she keeps a record of her own dreams. But these are more than just a source of inspiration. She expressively points out in conversation that her interest in Surrealism was not mere juvenile excitement (at the age of seventeen she painted, perhaps typical for that age, fantastic symbolic worlds and figures), but that today, a good ten years later, she still feels a special closeness to the movement centered around André Breton.

It is striking that the dream paintings are generally more pictorial than the documentary ones. Lines play only a minor role, and areas of color become more the formal principle. The colorfulness also – not surprisingly – increases. Maybe dream worlds really are more colorful, at least in the waking imagination and in the pictorial implementation. Contrastingly, the choice of materials (crayon, watercolor, acrylic, and oil on cardboard, paper, Molino, and patterned wallpaper) seems to have comparatively little influence. In addition, one can find a frequent correspondence in both work series in terms of the perspective, a virtually architectural sense of space. The spatial areas, distorted from a central perspective, often serve as compositional image areas, which, partially done in extreme lights and darks, again support both functions, the spatial and the compositional.

Back to the colors: to the question of whether she has a favorite color (admittedly a stupid question, but with ulterior motives), she answers: probably violet. Violet appears in almost every picture, she adds. Violet: the mixture of red and blue tones, of warm and cold: a kind of color symbolism for her merging of involvement and distance? In fact, mossy green tones and a strong auburn are much more frequent; in particular an auburn which, intensified and condensed into the blackish, generates contrasts. This is not only in the Tobago paintings, but also in Maria und die heilige Eidechse (Maria and the Holy Lizard) or Kubahaus 1 (Cuba House) and 2 (all from 2006) and even in the cycle Haus eines Anderen (someone else's house) from 2008, for example. Both of Elisabeth Wedenig's work strings display an astonishingly homogeneous atmosphere extending far beyond the color alone. To describe it with an image: imagine a wooden garden shed, warm summer rain drumming on the roof, you are alone with yourself and the sound, surrounded by a safe atmosphere inviting you to both dream and observe. The utmost in sensitive alertness and dreamy silence unite in a rare and strange symbiotic relationship. It's not that Elisabeth Wedenig's paintings are created like this, but this is what they communicate. She herself seems to follow her inner conviction very intuitively and thereby to have found her own way. We can only look forward to finding out where this path will lead her next – and her viewers with her.